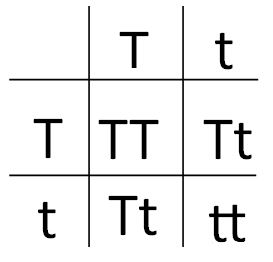 Gregor Mendel is known as the Father of Genetics. He was an Augustinian friar, born in Austria. Dissatisfied with the Darwinian views, then beginning to be known, he undertook a series of experiments on peas plants. He did not, as others had done and have since done, direct his attention to the entire group of characteristics making up the individual, but concentrated his attention on certain pairs of opposed features observable in certain plants. In the case of the pea, he observed that some were tall, some dwarf in habit; some had round seeds, others wrinkled; some had green endosperm, others yellow. He realized that characteristics are not lost, but can remain hidden on a gene that is not expressed; thus traits can be passed down and appear later. His work was a continuation of the learning that had been kept alive by the Catholic Church throughout the middle ages.

In this activity, we will look at common genetic traits in humans, then calculate genetic probability using a Punnett square a method invented by an early 20th century English geneticist named Reginald Punnett.  A Punnet square is a method of using a diagram  to predict the outcome of particular genetic traits.   You start with a tic-tac-toe diagram, and write the traits of the father across the top and the mother down the side. Then fill in the grid, and determine a probability of certain genes expressed in their offspring. This activity will introduce students to Punnet Squares first based on Mendel’s work with pea plants, and then give them practice on a human trait: eye color.  Before you get started a note: actual determination of eye color is far more complex than the following illustration. Since the completion of the human genome project we know that there are at least 37 different alleles and 8 different genes that influence eye color. This demonstration will be the simple historic understanding in order to introduce young students to a rather complex topic.

• Introduce Gregor Mendel to your students.
• In the first of Mendel’s experiments, a tall pea plant (TT) was crossed with a short pea plant (tt). The result of this cross was two tall pea plants (Tt).

• When these second-generation plants were crossed, the result was one tall (TT) homozygote, or organism with two of the same gene for a specific trait; two tall (Tt) heterozygotes, or organisms with two different genes for the same trait; and one short (tt) homozygote. Mendel concluded that tallness in pea plants was a dominant trait, and shortness was a recessive trait.

• Have your students draw a Punnet square of Mendel’s pea plant discoveries if desired.

• Now let’s look at some genetic traits that you have.  Let’s look at eye color and make a Punnet square.
• Begin by drawing a tick-tack-toe board on a white board or paper.
• Every parent has two genes for eye color. Let’s start with an easy example of 2 blue genes (bb) from the mother and 2 brown genes (BB) from the father. Add letters to square. Capital letters designate dominance. 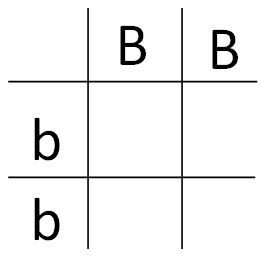 • Now write in the combination formed at each intersection. These children will all have the genotype Bb. 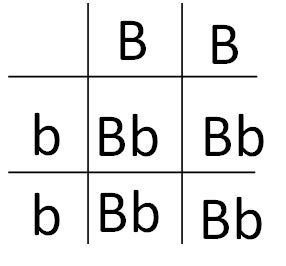 • This leads us to another topic of genetics, that of dominance. Brown eye color is dominant over blue eye color. This means that if you inherit 1 brown gene and 1 blue gene, your eye color will be brown. So no matter how many children this couple has, they will have brown eyes because they all inherited at least one brown eye gene, which is the dominant one.
• Now let’s get a little more complicated. Suppose a brown-eyed mother with genotype Bb from our example above weds a similarly brown-eyed father with genotype Bb. They have four children. 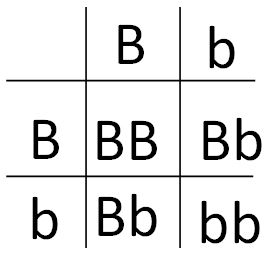 • How many children will have brown eyes? (3) How many will have blue eyes? (1) Why do the children who receive one brown (B) gene and one blue (b) gene have brown eyes? (Brown is dominant over blue)
• Can you determine the genotype of your parents by looking at the eye color of your siblings? Try to figure it out at home.
• Make additional Punnett squares with other combinations.