Thank you for joining Catholic Schoolhouse! Catholic Schoolhouse has been an apostolate, sharing our labors of love since 2009. Since then we have seized every opportunity to make Catholic Schoolhouse the best it can be. Because of this, there are a few different editions (distinguished by their copyright date) floating around. It is our hope to help you sort out the difference with this page!
.
Year 1, Year 2, Year 3 will be renamed Tour I (2017), Tour II (2018), Tour III (2019) with each new chapter cycle. This is to emphasize that these are three cycles and to distance us from an association with levels or grades.
.
Thank you to all the editors, parents, and students that have sent in suggestions and corrections! This is a tremendous amount of content and we could never have done it without you!
.
The only  revision that should cause you to need new editions was during the creation of the CDs from 2012-2014. We do not recommend purchasing books with a copyright prior to 2014 on the used market.
.
We have created this page to help you save the expense of purchasing new editions.

Current stock is the new 2017 Tour I edition and includes the following updates:

The following are revised on the 2017 cds.

Errata: The CD states in the Q2 intro that Elizabeth Ann Seton had five daughters. She had five children, three daughters and two sons.

The Statue of Liberty is on Liberty Island (not Ellis Island)

The following has been updated in the 2017 edition.

2014 edition is prior to the cd’s and does NOT have the history sentences included in it. Other content is similar, but the cd wording may not match.

Card 24 – Clarification: The Declaration of Independence was adopted on July 4, 1776. Controversy over when exactly it was signed continues. Within a decade after the event, Thomas Jefferson, Benjamin Franklin, and John Adams all wrote that the Declaration had been signed by Congress the same day it had been adopted, on July 4, 1776. However, several signers were not yet elected, and therefore could not have even voted, yet alone signed, on that date. Current thinking is that signing was completed by August 2, 1776.

State History – The last three weeks of Tour I have always been reserved as a place to study your state history, therefore there were no history cards for these weeks. In the new Tour I edition (2017) fill-in-the-blank style cards have been added to assist you.

Tour II Tour Guide – The following changes have been made in response to suggestions from all of you–thanks for making our Catholic Schoolhouse better!  Printable update sheet

In general, wordings were changed to more exactly match the lyrics of the songs.

Tour II Art – Art received some significant updates and improvements to better show the history and development of art. Specific changes will not be listed here.

Tour II Science – Science received a general edit with improvements to clarity and instructions.  Specific changes will not be listed here.

The following changes were made from the 2016 Year 3 edition to the 2019 Tour 3 edition. For changes in earlier editions, scroll down.

Art received a thorough edit with improvements to clarity and instructions.

Science received a thorough edit with improvements to clarity and instructions.

Card 8 – Vasco da Gama – Corrected text (some editions state that Calicut later became known as Calcutta, which is not true. Calcutta is a different city in Northeast India.

Rounding the cape was difficult. Remember, Dias had wanted to call it the Cape of Storms for a reason. After several tries, Vasco da Gama succeeded and sailed on, landing in Calicut, a town on the West coast of India famous for its spices and cloth. It is possible that our word calico (a woven cotton cloth) comes from this famous city.

Card 17 – Clarified confusion with dates 1519 and 1521. 1519 is the most important date to memorize, as that is when the majority of the events occurred.

In 1519, as the Spanish explored what is now Mexico, they were led by Hernán Cortés, a bold and wealthy soldier known as a conquistador.

After arriving in the New World, Cortés had his ships burned so his men could not turn back. This ensured that they remained loyal and ready to fight! Cortés quickly realized that the Aztecs and their king, Montezuma, were the wealthiest inhabitants of this land. Their Pagan rituals were shocking to the Catholic explorers.

Throughout 1519, Cortés’ men battled the Aztecs, taking their leader Montezuma captive. Their advantage of guns, along with immunity to European diseases, greatly reduced the Aztec population. With the help of rival civilizations, the Aztec capital, Tenochtitlan, was destroyed in 1521.

Mexico City was built on Tenochtitlan’s ruins. Today, when someone travels to Mexico and gets sick, it is called Montezuma’s revenge.

Card 90 Eiffel Tower – clarification – While the jamming referenced was strategically important to WWI, the reference to the flag and Hitler are from WWII. The middle paragraph will be re-written:

In 1914 (WWI), powerful jamming transmitters were installed on the tower. During WWII, German soldiers climbed the 1710 stairs to place a swastika on the tower; every time it was replaced in the night with a French flag. This resulted in the saying, “Hitler conquered Paris, but he never conquered the Eiffel Tower.”

The new 2016 edition of the cd’s has the following changes:

These three years, with 24 weeks, and 10 subjects contain an enormous amount of material! We are ever grateful for the many, many eyes, ears, and minds that have reviewed, pre-read, and offered their suggestions!! Please continue to make this, your Catholic Schoolhouse apostolate, better and better.

Praise be to God! 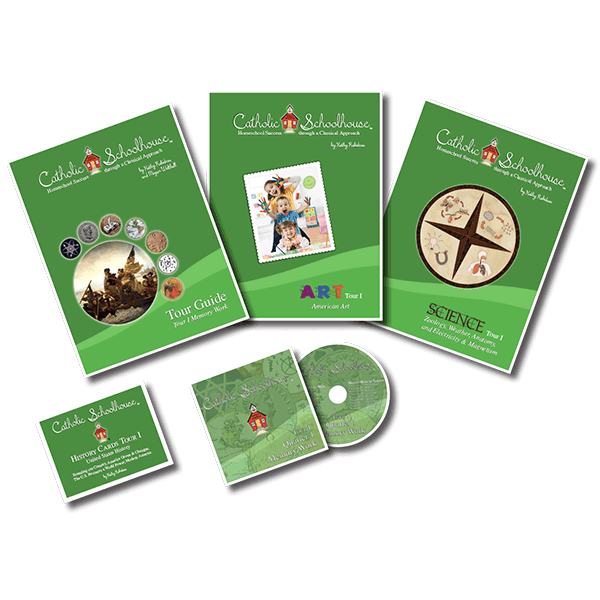 If you would like to help the mission of Catholic Schoolhouse, consider donating to further Catholic education and culture.  All donations will go towards future products and scholarships.

Catholic Schoolhouse, Inc. is a non-profit 501(c)(3) organization. Your donation is tax deductible.