We started Catholic Schoolhouse many years ago to provide our homeschooled children with a classroom environment and to add some structure to our own personal homeschools. As a result, our children now have a wonderful peer group that they see regularly. They have become good class participants. They get a thorough art and science class each week. And, they have many other opportunities that cannot be replicated at home with their family (such as speaking in front of a group or doing a class performance for their parents!)

How each of us arrived where we are now is a slightly different story. So, here are the stories… 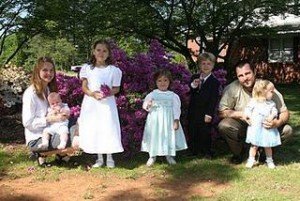 I have always homeschooled my children. Surrounded by such a large homeschooling community in our area, it seemed natural, although we did observe three local schools prior to making the homeschool decision.

By the time my oldest was finishing kindergarten, I had decided that non-academic homeschool co-ops took too much valuable time away from academics. If I were going to lose a school day and not accomplish household jobs or shopping or such, then my daughter needed to do more than a cute craft and free play with peers. I was also seeing a potential for several different core peer groups developing for my children. This was going to cause a lot of different play dates, yet another interruption to our “quiet” homeschool life. In order to meet these needs, I started visiting different homeschool support groups, co-ops, and such.

Although I had some concerns, I decided to participate in a non-Catholic classical homeschool program that had an academic focus. While not entirely sure of my decision, I recruited my friend Kathy to join with her younger children. The program was very nice, but I kept thinking that with some simple changes and some added emphasis on Catholicism, the homeschool program would be ideal!

At this time, I only had four children. With the possibility of more children to come and many years of homeschooling ahead, I decided creating my ideal program was a good investment of my time. Anyway, how hard could it be? So, I talked with some friends who agreed the program could fill a void in the Catholic homeschooling arena. In particular, Kathy encouraged me, and we teamed up to create Catholic Schoolhouse.

After one crazy year of determining our scope, structure, goals, plans, writing memory work, and choosing projects, we recruited our members. We ended up with a small, but dedicated, group of families. The year was so enjoyable! I felt that all of the work had been worthwhile, so we continued creating years two and three to complete a three-year cycle of academic work for elementary age children. Now, years later, after lots of planning, writing, and editing, Kathy and I hope that other communities can benefit from this program that we have so carefully researched and coordinated. 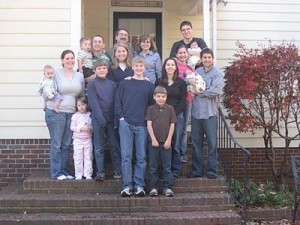 We started homeschooling in 1999. Neither Tom nor I were particularly inclined to homeschool. In fact, I would say it was the last thing we ever planned to do. In spite of this God called us and we pulled five kids, grades K through 7 out of school. It was a little like jumping into the deep end of the pool and then learning how to swim! To say that God has blessed us for answering His call to homeschool would be an understatement.

As my children grew and our emphasis shifted to high school and college, I noticed my elementary aged children were getting lost in the academic shuffle. It was so easy to just do the minimum, saying, “I’ll get to them later.” Sometimes we started an interesting topic, but often got interrupted by the demands of other stages, only realizing later that 12 weeks was too long to spend on spiders!

Deciding to give one morning each week exclusively to them has been a wonderful decision. The structure written into Catholic Schoolhouse propels us forward each week to discover new things. They have made new friends who inspire them to learn more. The curriculum and idea sharing between moms has pushed burn-out away with fresh approaches. My children’s success has encouraged me to want to share Catholic Schoolhouse with you.

(Since this posting our family of 7 children has grown–as of 2015, we have four successful college graduates– yes, they will do great, four married children and a total of 10 grandchildren)

Meet the rest of the Catholic Schoolhouse Team...

Catholic Schoolhouse is an apostolate possible only with the collaboration and input of many, many, people.  The following are just a few of the dedicated homeschoolers who are making CSH possible for you! We extend our gratitude to these and all who remained unmentioned. But, the most important are our Catholic Schoolhouse families–thank you for joining us on this amazing journey!

George Schmitz graduated with degrees in microbiology from the University of Wisconsin in 2006 (Ph.D.) and the University of Illinois in 1999 (B.S.) with a minor in chemistry. He is married to a faithful woman who is a pro-life obstetrician/gynecologist and is the father of four beautiful children with a fifth child expected in June 2016. For several years, Dr. Schmitz taught introductory biology and advanced science as an instructor at a community college and in university courses. In addition, he has published articles from research projects in the fields of bacterial physiology, agricultural biotechnology, enzymology, protein structure, and the industrial production of fungal enzymes. Dr. Schmitz made a decision to homeschool his own children in 2013 to ensure their upbringing in the Catholic faith and to strengthen familial bonds.

Dr. Schmitz is interested in most branches of science besides those in his fields of expertise. He believes that discovering the beauty of creation reveals the majesty of our loving God and that science is a powerful method for understanding the natural world. However, Dr. Schmitz opposes the ideas of Secular Humanism and New Atheism, which promote science as the only way of knowing. He believes that science is too often abused as a sad excuse to displace God from public discourse. His other interests include music, Catholic theology and philosophy, world history, and bioethics, which pertains to the moral use of controversial advances in biology and medicine.

History composition – Rick Moyer, http://www.moyermultimedia.com, if you like Star Trek, give Rick a visit for his hilarious parodies!

All other CD tracks and producer – Bruce Zimmerman, SoundProductionsMusic.com

If you have a passion for classical education and homeschooling, we would like you in our community!  If you would be interested in serving in any of the subject specialty areas above, please contact Kathy.  With Catholic Schoolhouse’s decision to be a non-profit corporation, we also have space for executive board members with knowledge in finance, social media, and non-profit mission.

Catholic Schoolhouse was founded in 2007 to enhance education in the grammar stage by providing classical memory work for the Catholic homeschool. Going beyond simple memory work, the developers enlisted experts in all areas of study and a wide variety of resources, Catholic and secular, homeschool and non-homeschool to determine what information is typically encountered during the elementary school years (K-8).

Individual families, chapters and co-ops are able to succeed, bring family unity to teaching, and belong to a greater Catholic community with Catholic Schoolhouse.

Homeschool Success through a Classical Approach