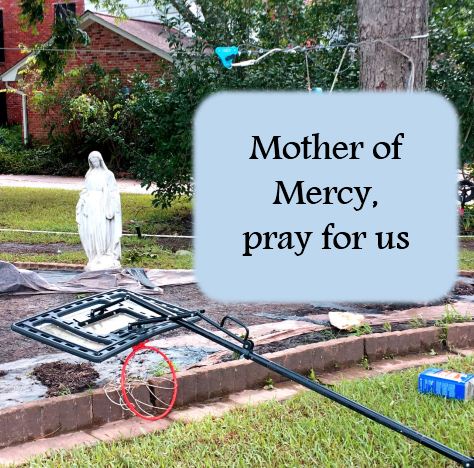 Betsy Perryman has generously taken the time to share the stories of her family and others who were and still are being affected by Hurricane Harvey, which hit the Texas Gulf coast in the last week of August, 2017.  A huge thank you to Betsy for taking the time to  share with us the situation in Houston for our CSH families.

The rain stopped a little over a week ago, but many people here in Houston don’t even know what day it is.  Time has stood still, and become a blur of rain, destruction, and aftermath.  I can only wonder what it was like in the time of Noah.  But there is a difference, one large difference among many.  We have not turned our backs on our Father, and He has not left us alone. Our God is faithful, and as His people we are called to faithfulness in the storm—before, during, and after.

Although the greater majority of our Chapter families were spared this pain of total loss, we all know multiple people who are experiencing it—the suffering and joy of all that God is working secretly.  In these few moments, I will share just a few stories of pain and loss, awaiting the resurrection.

Our family lives in a neighborhood which is surrounded by three lakes, along with a bayou/nature preserve at the back of the neighborhood.  My husband, Trey, and I prepared to stay and went shopping the Friday before the storm.  The shelves were empty and the lines were long, but NOTHING compared to what they would be just 5 days later.  That Friday at lunch, we watched the news and decided that it just wasn’t worth it to stay. We have a high medical needs child (currently stable) and the bridge to the hospital would likely be flooded over.  We were fortunate to have evacuated.  Our neighbors decided to stay and their decision to do so, is one for which we will be forever grateful.

Our neighbors were texting us throughout the nights of rain.  No sleep was to be had in Houston.  Our neighbors were running outside, with water up to their thighs, clearing the storm drains, in between hiding, as the alarms for tornados were going off constantly.  That was the scariest part–to hear the rain, and not see it; to hear the rushing water and not be able to tell how deep it was, and what might be swimming or floating in it.

The story was the same in many places. Dickinson was one of the hardest hit with flooding; it was unimaginable.  A dear friend and chapter mom from last year, Kathy, described it this way:

“I want to say that we feel so blessed…blessed that I have a brother and his friend who heroically came to our rescue when we had almost given up hope.  He rescued 7 more people and 2 pets before the boat ride was over.  His wife, my sister-in-law, took us in and helped us recover this last week and worked so hard to help us feel normal again.  While standing in that water for (12 total) hours in the dark with unknown things swirling around my bare legs and my son crying, I had completely detached from every possession I had and I had only one thought…’Jesus Christ, Son of the Living God, have mercy on us and save us.’  I will never be the same.  God is good.” 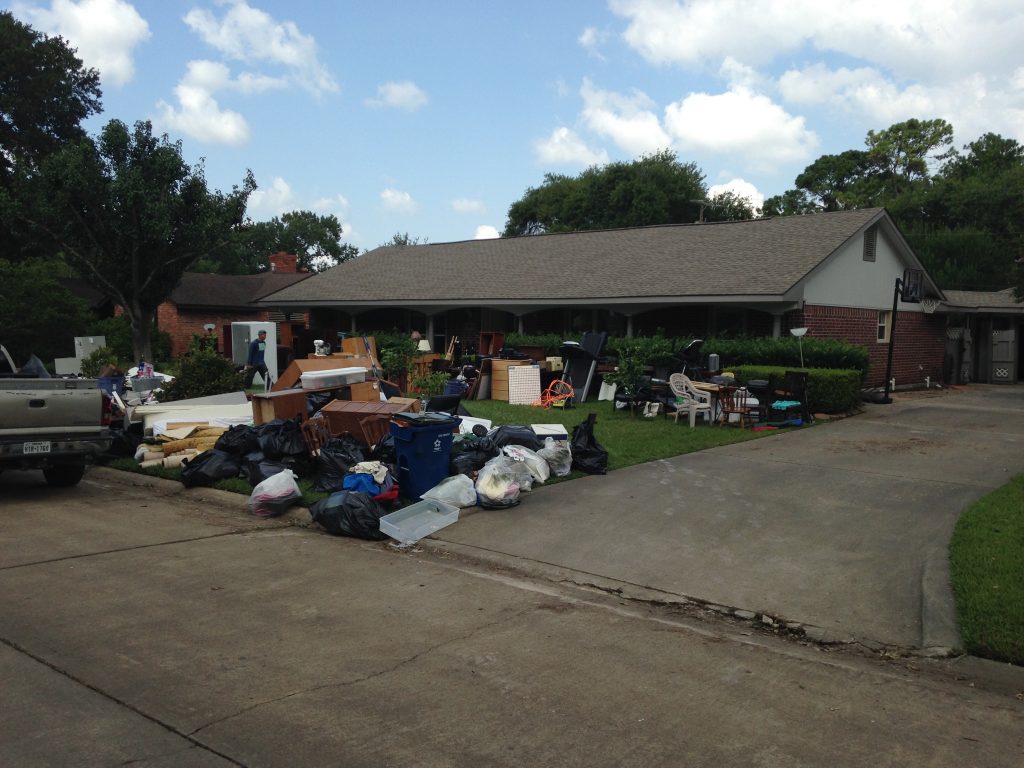 Kathy and her husband lost everything.  They are awaiting remediation because they were flooded with sewer water as well as rain water.

Some friends of ours, with whom we were just on a vacation/retreat a month ago, were some of the first to be rescued by boat in their town of Friendswood.  They have four children. He is a high school teacher and she has a heart for homeschooling.  The oldest is six and their youngest, the baby, is 3 months old.  They lost everything.  With four feet of water rushing into their house, they quickly climbed into the attic and cut a hole in their roof.

The thing is, their story is one of THOUSANDS like it.  Destruction.  Total loss.

My husband went to help gut an elderly man’s home in Dickinson.  The gentleman goes to our local parish and is a faithful Catholic, but no one knew he was a hoarder.  It was awful.  My husband described it as a nightmare. Not only this gentleman’s house, but the entire neighborhood was destroyed.  Nothing left. He told me that the entire time they were working, you could hear helicopters flying overhead.  “It’s very fitting, because it looked like a war zone.”

Our own Ryan family lives in Dickinson. They saw the water getting to close to their house and decided it was time to pack up their three boys and get out.  They were able to get to a sister’s house, but ended up losing their car in the flooding.  This is very difficult since the mom is hearing impaired and the Dad is the sole driver of their one car.  Mr. Ryan is still looking for a rental car more than a week later.  He will need to fly to another city just to get a car to get to work.  Their house was spared, but not their garage.

Our Van Velson family had a similar experience, only they live on a lake.  Mr. Van Velson watched the water rising very quickly during the night, approximately 8 inches per hour, up their steps of their elevated home.  They decided to pull some “MacGyver” stunts to rescue their kayak, which ended up being their way to escape their house.  The water rose more than 5 feet in their backyard.  It was at least 3 ½ feet in the street in front of their home.  They were blessed to have lost only their car and their garage. 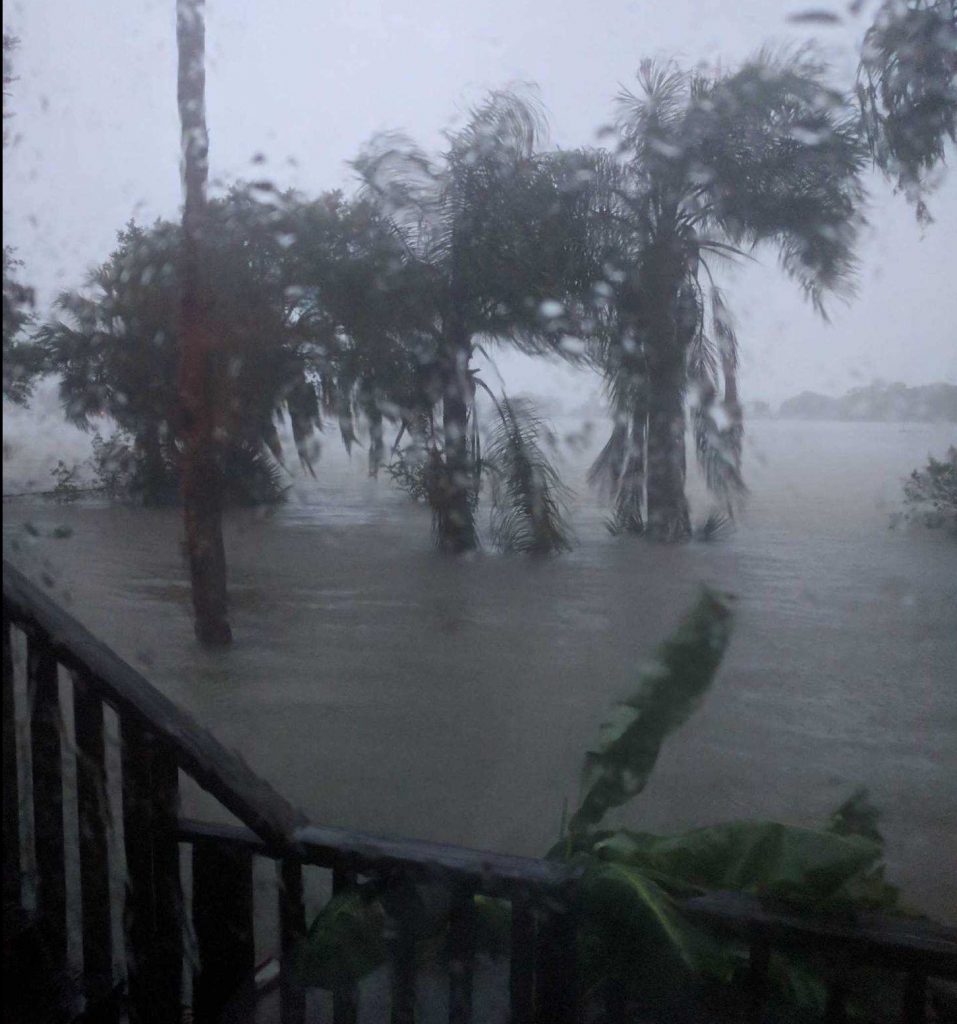 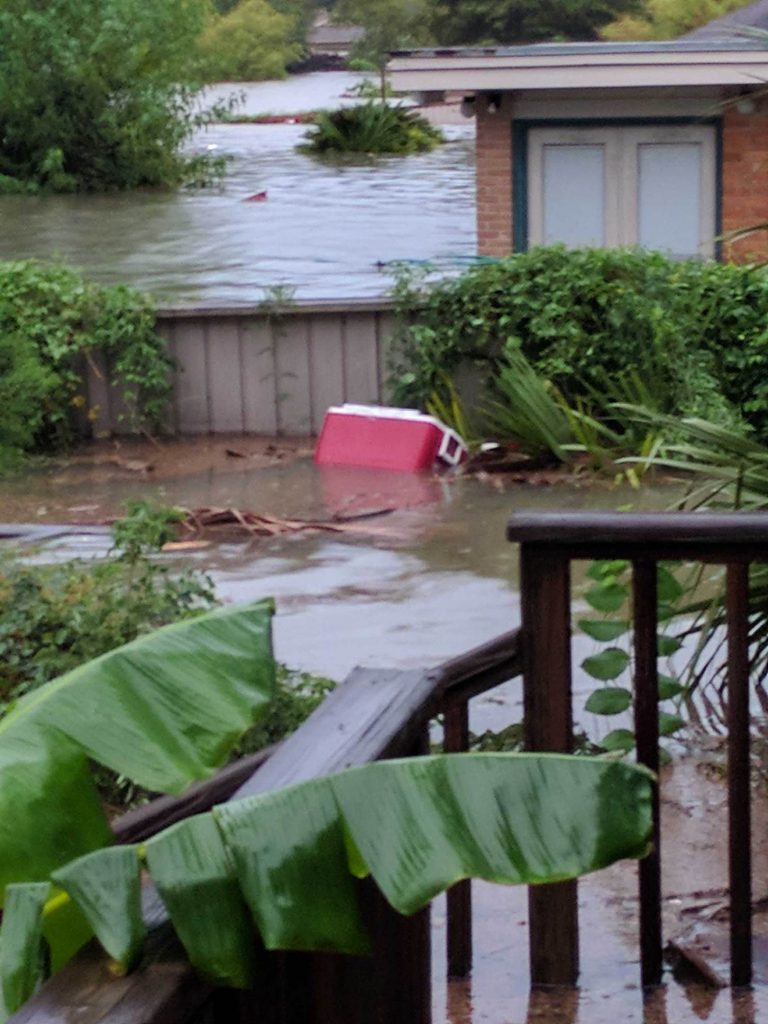 Nancy, our former co-director, has had a whirlwind of a few weeks, and unfortunately it is not over yet.  During all this, poor Nancy has been packing up her house to move.  Her house was ready and closing was just a few days away.  Then Harvey came.  Praise the good Lord that the house is high and dry, but the whole time she was handling three little boys while her husband was already working his new job in Florida. Closing was postponed and the movers refused to come until the middle of September.  This week she finally arrived in Florida, only to look at their new house, get back in the car, and evacuate…for the second hurricane that will impact their family in two weeks, in two states.

Our Katy director Alexis and her family were not at home when Harvey made his entrance.  They couldn’t get back for days.  They ended up flying into San Antonio and renting a car just to get home.  Their neighborhood flooded.  They had a foot of water in their house and were blessed to have neighbors start pulling out the soaking drywall before they were able to get home. 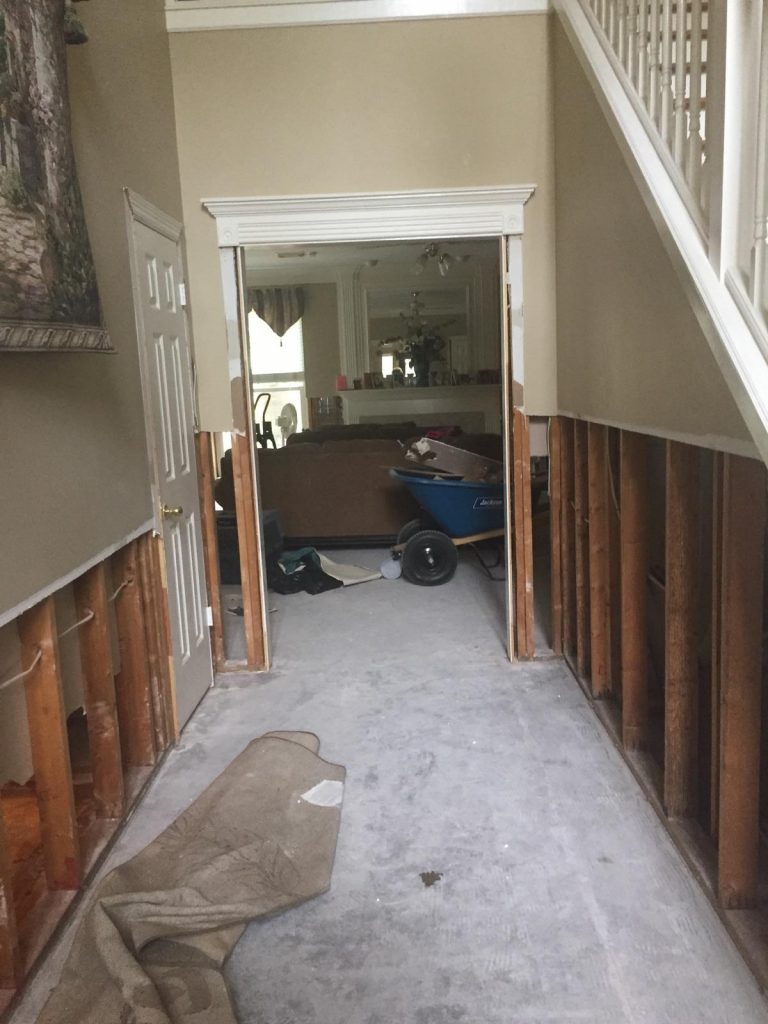 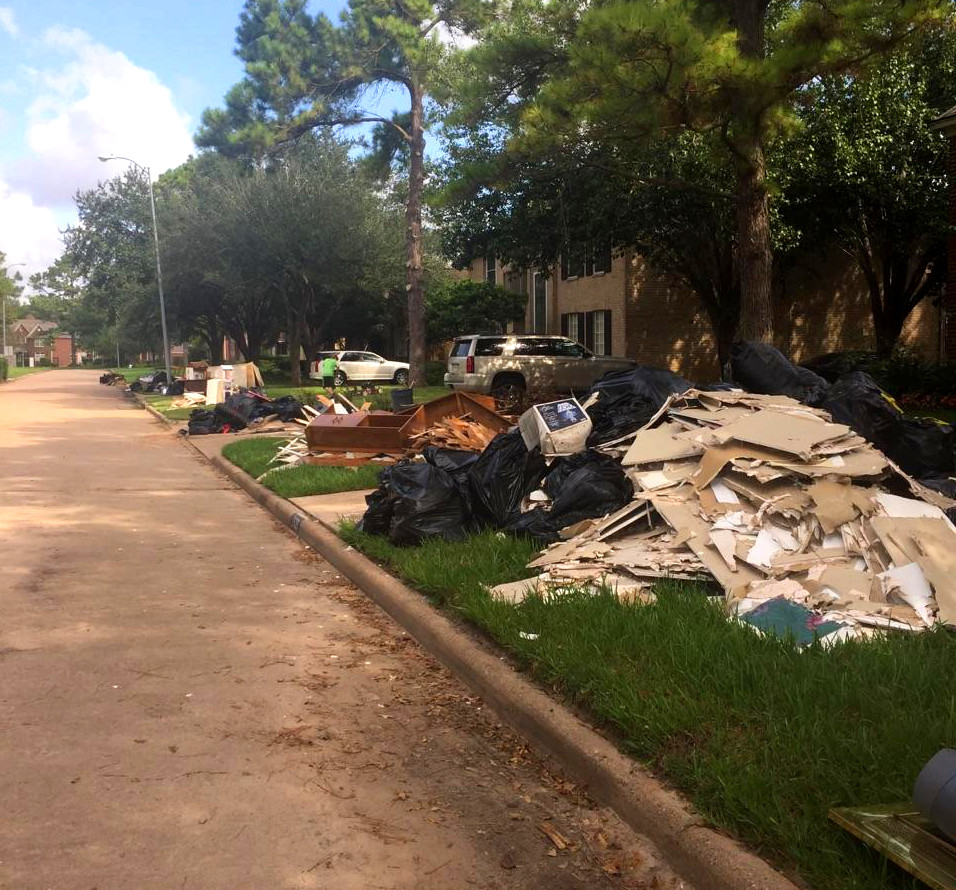 The small church that the new Katy, TX chapter was to meet in this school year has become a refuge center. So many have lost their homes, and finding normalcy for those that are still in Katy may take years.

Finally, I will close with two more stories.  The small little evangelical church, Trinity Fellowship, where we are blessed to meet ended up flooding.  They are located in Friendswood near a creek. They flooded AFTER the rain had stopped. The pastor checked on everything on Tuesday morning and found things satisfactory.  Just a few hours later, the secretary stopped by and found inches of water over the entire building with meeting spaces and classrooms.  All their carpet and 12 inches of drywall is now gone.  They are in a neighborhood which was hit the hardest…including a two story house underwater.  We are blessed that it wasn’t worse flooding for Trinity Fellowship.  They have become a light to the neighborhood and are providing free dinner for those who live and volunteer there.

Trinity Fellowship has been damaged in a much more devastating way than expected.  They do not expect to have use of their classrooms and office until December at the earliest.  They need to take off their inside walls, as well as all the outside walls.  A team of volunteers will be moving in to work full time on their facility.  They plan to be hosting volunteers and daily dinners for the neighborhood for the next two to three years. 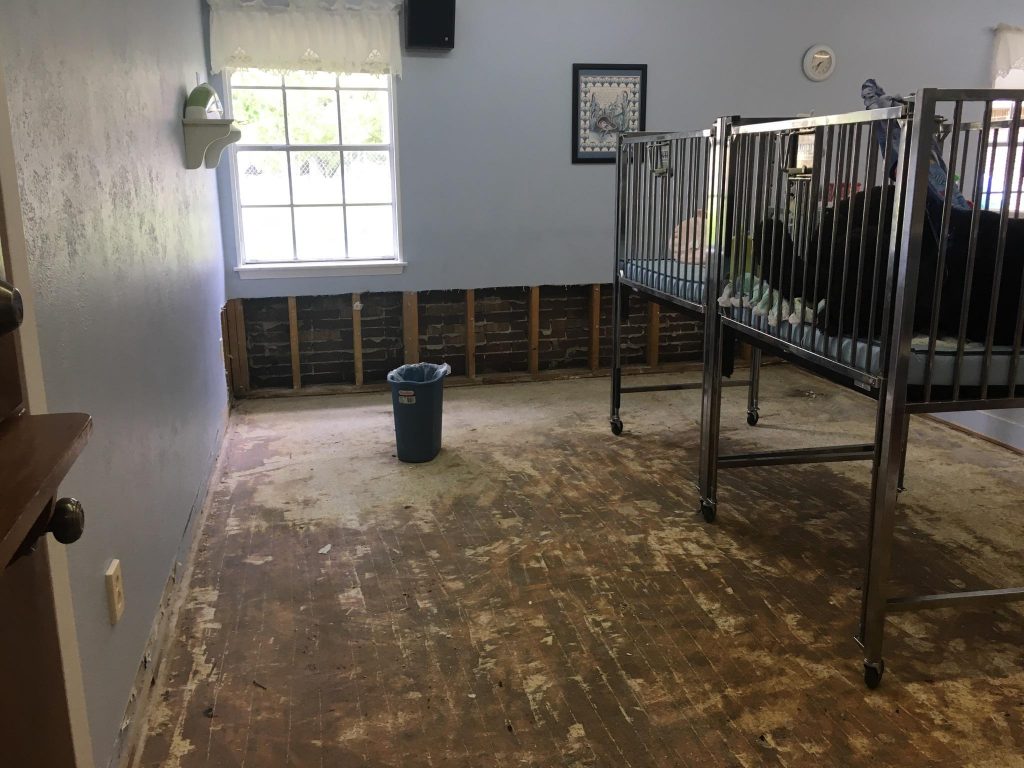 (The Nursery at Trinity Fellowship Church)

We personally have some friends that live in that neighborhood with Trinity Fellowship. Our friends are solid Catholics who have lost everything.  They are currently living in a one bedroom apartment with 5 young children, one who is special needs.

Days after they were rescued by boat, they went back to their street where entire cars had been washed away and still not located.  Yet in their yard, not attached to anything, not moved, stood Mary.  Our Lady stood in the chaos and was not surprised by the torrent.  She continues to point us to the reason to live and love.  She has not abandoned us.  Our God will never leave us.  We are firmly in his hands. 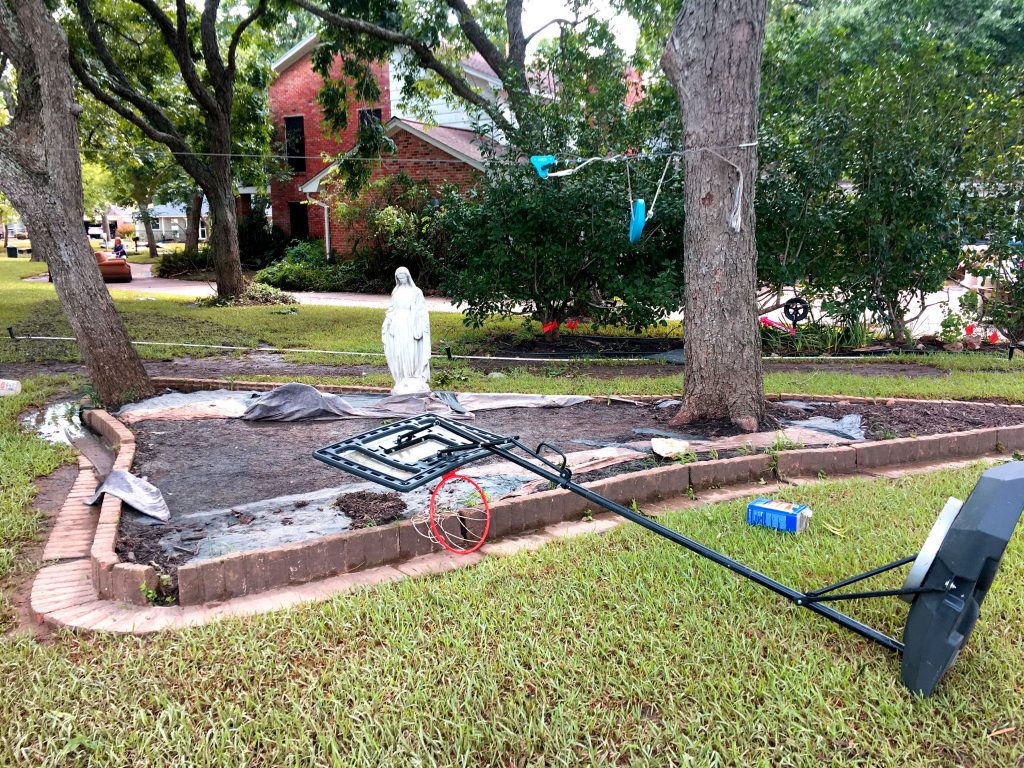 Catholic Schoolhouse is more than just homeschooling; we are a family, here for one another and for the greater community. The CSH families in Houston are helping Trinity Fellowship provide meals for the area.

If you wish to help monetarily, Catholic Schoolhouse has created a way to help those in our CSH family affected by Harvey. Please use the “Donate” button below or on the right side of the page.  One hundred percent of any money received will be sent to those affected. Catholic Schoolhouse, Inc. is a 501(c)(3) non-profit and your donation would be tax deductible.

We are also offering to replace CSH materials free of charge for anyone who has lost them in the floods. Please send names and which Tour they are using this year to shipping@catholicschoolhouse.com.

“. . . Make us aware of your mercy this morning, Lord, and let your strength be our delight” –LofH, Week I

100% of donations received will go to our affected Catholic Schoolhouse family members.

Catholic Schoolhouse, Inc. is a non-profit 501(c)(3) organization. Your donation is tax deductible.