We are so much more than our books…we are a family! Joining or forming a Catholic Schoolhouse chapter brings you right into the middle of a loving, prayerful community of families, both locally and nationwide. 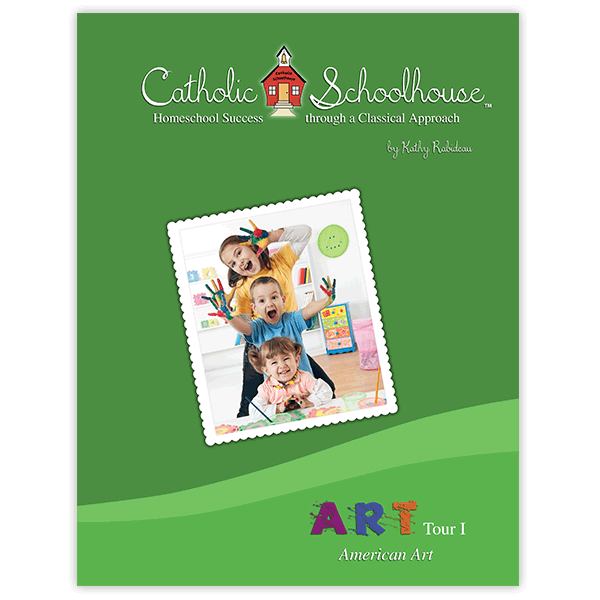 Our art program is a first of its kind–wholly Catholic with projects meant to be enjoyed together by the entire family–all while staying in sync with the timeline.

The History Cards (timeline) make you an expert because we have done the research for you and found you a historic art picture to go with each event creating cross-curricular learning. 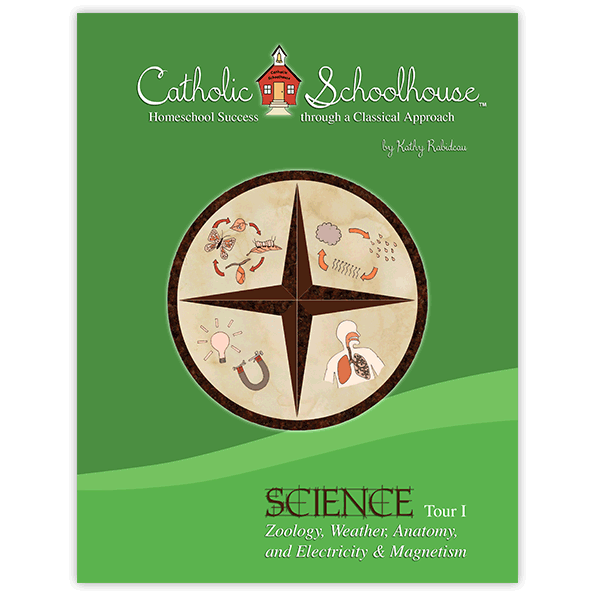 Our hands-on science book makes your prep a piece of cake with activities that coordinate with the memory work. 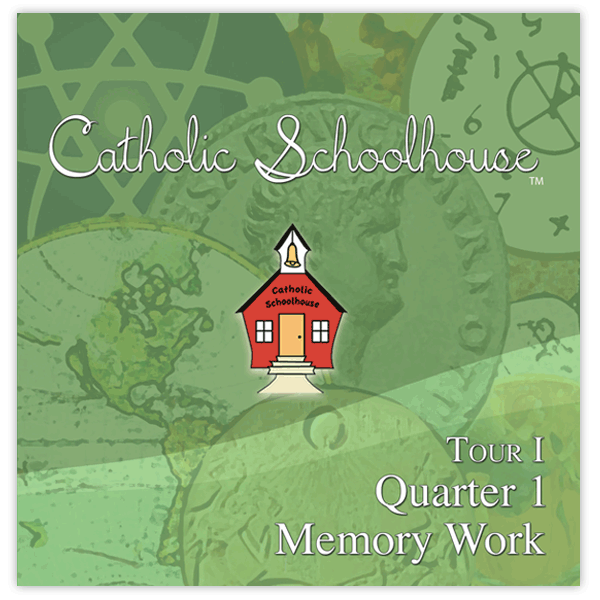 The CD brings learning alive  and makes your job easier! We didn’t cut any corners. Everything that is in the Tour Guide (memory work) is on the CD. A variety of singers and styles will keep the ho-hums away! Play the demo below to hear our Council of Hippo history song–with all 46 Catholic books of the Old Testament!

Watch on our YouTube Channel: CSH-TV What is Catholic Schoolhouse?

“[The Catholic sc­­hool’s] task is fundamentally a synthesis of culture and Catholic faith, and a synthesis of faith and life: the first is reached by integrating all the different aspects of human knowledge through the subjects taught, in the light of the Gospel; the second is the growth of the virtues characteristic of the Christian.”

Yes! Our three-year cycle allows students to touch the same memory work twice during the elementary years, then again in middle school, and even again in high school if desired—retention requires repetition!

The catholic classical memory work becomes the pegs on which your students hang future learning, gaining depth each time they see the material. Students blank out and loose interest when information is too abstract for them to grasp—but when they can say, oh, Pericles, I’ve heard of him, they engage—because they have a hook in their brain to hang the new knowledge on.

Young students readily memorize images—one 5 y/o learning the time line, a year later was shown a book about ancient Rome—he opened the book, recognized a picture form the CSH timeline, and said, “Look, Mom, it’s the founding or Rome!” Our timeline images are famous works for this reason, so kids will encounter again and again, building excitement because they know them.

A home-schooled student went to Catholic high school—his first time after homeschooling. He was a boy you may be familiar with, his study skills, not that great. After the first history test returned a B, his mom was much relieved, as she hadn’t seen him open the book. Son, you need to work toward an A, but really, how did you get a B, I didn’t see you study? His reply, sheepishly, “Well, I didn’t study, but it was a multiple choice test and those Catholic Schoolhouse history songs are stuck in my head—I was able to reason the correct answers from the songs!” The Catholic songs for kids built upon the classical memory work homeschool style provided the foundation he needed to succeed outside the homeschool structure.

Now my personal story—my husband and I were college students during the trivial pursuit era. He absolutely rocked, leaving me in the dust every game. 20 years later, we dust off the old game, and I not only am able to hold my own, but I win! What? Wifey, what is going on? Yep, you guessed it, the Catholic Schoolhouse songs!

Learn the songs—your kids will have knowledge for life—and so will you!

How do multi-aged children learn together?

With a family-based program, everyone studies the same topics, just at different levels. The teacher presents the same information to all the students (yes, at the same time!), but what you expect back varies with age and ability. Think of an example where you are studying botany—you present the same information to all your children. Then after the lesson, your 5th grader may be expected research and diagram the process of pollination, your 3rd grader may write a short paragraph, retelling what you taught, your kindergartner collects leaves and makes a leaf poster. They each get a lesson based on their ability and needs—but at the dinner table when asked what did you study today—all are interested because it is all relevant to what they are studying—botany! And, surprise of surprise, when asked questions, your kindergartner replies, I know! Because he was at the table coloring while you presented the lesson you thought was over his head. Kids are sponges, why limit what they hear!

Classical education recognizes that there is educational content separate from skills.

Now what do I do?

Catholic Schoolhouse is unique, in that we believe, you, the parent knows your child best. We also know that you can’t become an educational expert in what to teach overnight, so we have done that for you. We have spent years of research to lay out what to teach, freeing you to focus on how.

Are you starting homeschooling for the first time?

Begin by realizing that your family has never been all together before. God is providing you an amazing opportunity!

Yes, that’s what I want! We’re so frazzled, running here, running there. Then virtual school came along and we were all in the same room, but on different devices—we weren’t together.

How do I do this with kids of different ages, don’t kids have to learn separately, each in their own grade? I don’t know where to start!

Our schools have evolved to use grade levels as their structure—but it wasn’t always that way. Think back to the one-room schoolhouse—a place where the entire family went to school together. You can have that one-room schoolhouse in your own home, but you still need some type of structure… Catholic Schoolhouse gives you that structure!

I’ve been homeschooling for some time, doling out lessons—I feel more like an administrator than a teacher! How can I gather my family and bring joy to my schooling?

Think of CSH as the vehicle to help you do that!

I get it, I love the idea of family unity, classical memory work, and joyful learning. I get the philosophy – now what? Please tell me how this works!

Homeschool students learn how to assess and sort through information as they grow, from absorbing information to persuasive debate.

Memory work helps students become familiar with the subject by memorizing basic facts. When they encounter the subject matter in other contexts then, they are already comfortable with it enough to apply those facts, for example, to grow their writing skills through essays, and develop communication skills with debate.

Memory work also helps expand young students’ vocabularies and prepares the brain for critical thinking. Recitation is a part of memorization, which is where the Catholic Schoolhouse music CD provides an essential and fun part of our memory work program in the catholic classical homeschool curriculum.

Bring joy to your homeschool!

The Tour Guide provides the core structure for your homeschool, through weekly subject matter that follows the History flash Cards allowing you to teach all your kids the same subject at the same time.

cathlyduffyreviews.com
Directors:  Click Here to go to the Director’s Site for resources, forums and more.

Catholic Schoolhouse stirves to be faithful to the magisterium of the Roman Catholic Church.