5 ways to keep ‘schooling’ when everyone is sick

Kristen Posted on February 18, 2019 Posted in Uncategorized No Comments 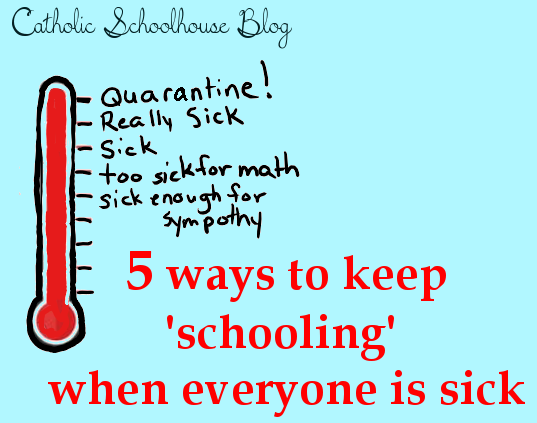 This post contains affiliate links to Amazon.  Thanks for supporting CSH!

The flu hit our house this last week. And by hit, I mean it slammed into everyone and knocked our socks off. We haven’t had it in about 5 years, so we were due for the flu.  Just because you’re all achy, fevery, and boogery (you know how it is), doesn’t mean you can’t do some schooling.  Here are 5 ways to keep on Catholic (home)Schooling through illness.  Just don’t bring your germs to your CSH chapter!

When we’re stuck inside and no one has any energy, it’s the prefect time to read those extra books you had planned to read but didn’t get to.  Entire book of Greek Myths! Bring it on. Space encyclopedia? why not? All the Old Testament Judges that you didn’t have time to read about in Week 6. yep. When they’re sick, your kids are literally a captive audience, so read until your own sinuses make it too uncomfortable.  I know I personally make unrealistic reading plans over the summer and figure out in December that there was no way I was going to read all of them aloud.  But, when you’re sick it’s the prefect time to review things from last semester that you didn’t quite get to, because you were picking apples or at the park on perfect fall day.

Captive audience remember? They can’t stop you.  Plus if you’re trying to push fluids, you can even make it into a drinking game.  (Not the grown-up kind of drinking game.)  “Every time a new week’s music starts, everyone drink your water!”

Or if everyone just needs to close their eyes and relax some, find a good youtube compilation of the composer music in Tours 1 and 3. I have links in the weekly blog posts.  Or if you got Story of Civilization on CD/MP3 listen to the chapters you’ve already read/listened to.

I know there are some cool lego memory work games already on the internet, and you can totally use those (Here’s a good one).  But my daughter and I made up our own.  I’ll write a separate post about how to play it, because it was too long to include in this post.

Or you can simply open the Tour Guide and take turns asking each other memory work questions. “Can you name all the Northern European countries?”  “Sing the Bread of Life Discourse.” “How many miles is it to the sun?” etc. It’s kind of humbling when you’re kids can beat you at the memory work.  This game works great laying down on a couch.  You don’t even have to look at each other for it to work. And there’s no points or rules, you just taking turns until you’re too tired to answer any more questions. If my daughter achieves super scholar this year, it’ll be entirely because we caught the flu this week.

We happen to own very nerdy puzzles.  We have two on space, and a periodic table puzzle.

If you don’t have educational puzzles, you should invest in them.  Kids love to read the words as they try to put them together.  Plus it’s more fun to examine a puzzle periodic table, than just a regular one for some reason.  Here’s a couple to get you started:

Here’s the periodic table puzzle we have (it was a gift, I had no idea it was this pricy!)

This is an easier one for littler kids:

A bible history one would fit in well with Tour II too.

Even if you don’t make it through a 1000 piece puzzle it’s still fun and relaxing.

5. Watch something educational on TV

Even you moms who are usually strict on screen time, give yourself some grace to use TV when you’re sick and your kids are sick.  We are usually a 2 cartoons/day max, at our house, but the tv was on a lot more this last week.  When we’re all better we’ll get back to our usual, and my kids know that. But while they’re all sick and sniffly, get cozy on the couch and watch some netflix.  We binge watched a show on Amazon called DIY SCI.  It was full of great ideas of science experiments you can typically do with stuff you have at home. Then we watched plenty of  Planet Earth and Planet Earth II on Netflix.  I know American History was last year (Tour I), but pull out your Liberty’s Kids and review how our Nation came to be.  We watched the new Magic School Bus (it’s pretty true to the original), and the new Carmen Sandiego (also alright) on Netflix. And when the baby is sick too, Octonauts works for multiple ages. Veggie tales have lots of Bible Stories we covered earlier in Tour 2 also.

So, even if it isn’t a real school day, you can still learn plenty or review what you’ve already learned, during your sick days. And all those times you felt like life was passing you by and your kids are growing up too quickly… well you can make up for it now by cuddling up with them (and a box of tissues). Just in case you need to stock up before the flu hits your house here’s Kristen’s Amazon List for surviving the flu. (I know a lot of people use alternative/holistic/natural remedies, this is not commentary on any of that, just a list of things that got us through).

So tell me in the comments, what do you do to keep ‘schooling’ through illness at your house?